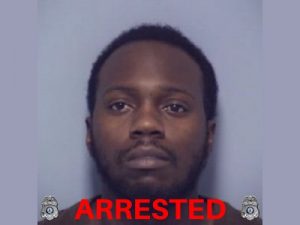 A Roanoke man is charged with shooting a woman inside a northwest Roanoke home. City Police say the victim’s injuries appear to be critical. It happened Wednesday night in the 1200 block of 13th Street NW. officials say 28-year-old Percy Johnson of Roanoke was arrested nearby a short time later. The victim’s name has not been released.

NEWS RELEASE: On August 11, 2021 at approximately 10:45 p.m., Roanoke Police were notified of a person with a gunshot wound in the 1200 block of 13th Street NW. Responding officers located an adult female victim inside a residence in the area with what appeared to be critical injuries. Roanoke Fire-EMS transported the woman to Carilion Roanoke Memorial Hospital for treatment. After clearing the residence where the offense occurred, Officers received information that the suspect might still be in the immediate area. A perimeter was set and officers began searching for the suspect. A short time later, Officers located a person matching the description of the suspect in the 1400 block of Grayson Avenue NW. That person was positively identified as the suspect and taken into custody without issue.