Why are applications up almost 50% at VT-C School of Medicine? 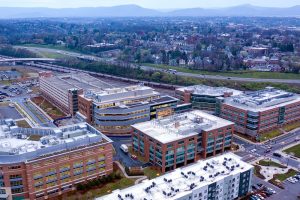 Applications to the nation’s medical schools are up 17% this year, but at the Virginia Tech-Carilion School of Medicine, that number is much higher. In one year, applications to VT-C jumped 48% per cent, this year approaching 6,400 for the 49 available seats for the class that arrives late next summer. School officials credit both its recent record – and the lifestyle that Roanoke offers. WFIR’s Evan Jones has the story.

The school’s application deadline for the Class of 2025, which has 49 available seats, was Dec. 1.

Medical school applications are up nationwide this year. The American Medical College Application Service, which processes submissions for most U.S. medical schools, reported a nearly 17 percent increase in applications near the end of October. In the past decade, the year-over-year increase has averaged less than 3 percent.

“There are a few reasons why more people may be applying to medical school this year: the pandemic may have increased a desire to pursue medicine and give back in this time of need; students may have more time to devote to medical school applications with virtual classes and employment; and it is a relatively inexpensive year to apply to medical school because the vast majority of interviews – like ours – have moved to virtual, saving travel expenses,” said Melanie Prusakowski, associate dean for admissions.

“As for our dramatic increase above many other top schools, I’m confident our curriculum – centered around research, team-based care, and knowledge of the systems that impact delivery of care – is valued even more during the current pandemic,” Prusakowski added.

In the midst of screening thousands more applications than normal, the admissions team also had to shift the interview format to virtual to help keep applicants and the community safe.

In a typical year, the Virginia Tech Carilion School of Medicine interviews between 280-288 applicants over the course of six interview weekends in the fall and winter in-person at its campus in Roanoke, Virginia.

The medical school uses an interview format known as Multiple Mini Interview (MMI) where students rotate through a number of interview stations. At each one, they read a scenario and then discuss their point-of-view with the interviewer. The scenarios help the admissions committee evaluate skills that may not be apparent on their resume or CV, such as ethics, problem-solving, and teamwork skills. They also get a more traditional interview with a member of the admissions committee to talk about their accomplishments, desire to become a physician, and interest in the Virginia Tech Carilion School of Medicine specifically.

In addition to the interviews, applicants also get a tour of the school and surrounding community. The evening before interviews, a casual reception is hosted for applicants to meet current students and faculty and ask questions.

All of that had to be redesigned to happen virtually this year. “We’ve tried to mimic our in-person interview experience as best we can,” Prusakowski said. “Some of the presentations they normally would have seen in person have been adapted to video. We still offer applicants a time to socialize – virtually – with current students without faculty or staff being present so they can really ask the questions and get a feel for what it is like being a student here. They get a similar experience with faculty.”

The admissions team was also able to reconfigure the MMI process virtually via Zoom so that students still talk through a variety of scenarios with trained MMI interviewers as well as experience a traditional interview with an admissions committee member.

So far, the admissions team, admissions committee, and a cadre of volunteers – typically around 25 per interview day who have been trained in MMI and to do it virtually – have held four successful virtual interviews on Saturdays in September, October, and November. Two additional interview days are left, one each in January and February.

“The entire admissions team has worked hard to figure out how to pull this off virtually,” Prusakowski said. “From figuring out the intricacies of Zoom and adapting our MMI to work in that environment; to working with our interview volunteers to prepare for the shift to a virtual environment; to developing a secure, online way for interviewers to submit scores for each student, all have gone above and beyond to make this shift as seamless as possible.”

Beyond the interview itself, current students have shared that coming for the interview allowed them to see the school’s culture as well as the surrounding community first-hand. While not the same as experiencing the school and community in-person, the admissions team partnered with the school’s communications team to create an online experience for prospective students to explore. It includes a look inside the individual spaces at the school, as well as videos and information about Virginia Tech, Carilion Clinic, and neighboring Fralin Biomedical Research Institute at VTC. Assistant Director of Admissions Kelsey Daniel also gives a tour of the community surrounding the school to give applicants a taste of what it is like living in Roanoke.