Why the national parties are looking closely at General Assembly races 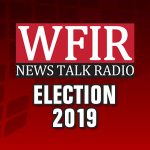 Tens of millions of dollars have poured into the relatively small number of General Assembly races considered most in play — and most likely to determine which party or parties control the Virginia legislature for the next two years. And as WFIR’s Evan Jones reports, those races are getting plenty of attention from both national parties, which look upon the results as a possible bellwether of next year’s presidential election: