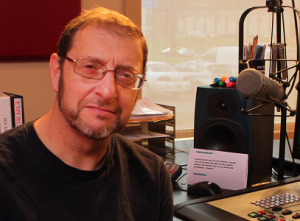 WFIR Anchor/Reporter Gene Marrano takes on an additional duty as host and co-producer of a local program on Blue Ridge PBS. “Business Matters” will air weekly on Fridays starting tomorrow, April 2, at 7:00 pm. The program will focus on regional business news along with development in the economic sector.

Local news and business journalist, Gene Marrano, will host and co-produce the series. Fenderson says that “Gene’s background as a talk show host, print, and radio journalist in the Roanoke-Lynchburg market, makes him the perfect choice to spearhead this project.” Marrano is currently a news anchor and reporter for WFIR News Radio, and the editor of Valley Business Front magazine. While the show is currently produced and recorded via the Zoom online platform as a way to safely interview guests, the program will eventually move to an in-person studio format, once Covid-19 restrictions are lifted.

Marrano says, “I am excited to partner with Blue Ridge PBS for this project. There is so much happening in Southwest Virginia, economically and entrepreneurially speaking, that it makes sense to share this information with the general public.”

Each new episode will premiere Fridays at 7 PM, with an encore presentation each following Wednesday at 7:30 PM. Thirteen episodes are planned for the first season, which will run through early summer. All episodes will be available for later viewing on BlueRidgePBS.org.