We have liftoff: Va-launched flight on way to space station 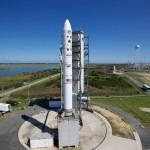