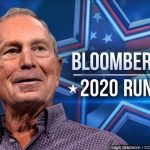 RICHMOND, Va. (AP) — If there is a state where Democratic presidential candidate Mike Bloomberg could expect a return on investment, it is Virginia. By investing millions on state legislative races, Bloomberg helped Democrats take back the statehouse last fall. With full control of government in Virginia, Democrats have started pushing through progressive legislation on everything from gun control to gay rights.

And the state could serve as a centerpiece of his unorthodox campaign strategy of skipping the early primary states to compete in the 14 states that vote on March 3, Super Tuesday. At a Saturday campaign event, Bloomberg told a crowd of more than 900 that he’s running a campaign focused on defeating President Donald Trump — and that to win in November, “we absolutely have to win this commonwealth.”

Bloomberg launched his campaign with a handful of events in Virginia, has opened seven offices across the state and has a staff of more than 80 people on the ground. His Saturday visit was his sixth to the commonwealth, the most visits to any state so far, he told the crowd. His longtime political investments in the state have helped win fans among voters and local elected officials alike. State legislators and new members of Congress — almost all of them women — have counted him as a supporter. His campaign to take on the National Rifle Association has helped advance aggressive control legislation in the General Assembly.