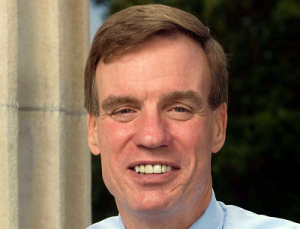 Senator Mark Warner made it official today: he will seek a third term in office. But Warner is postponing his planned five-day statewide announcement tour in light of growing coronavirus concerns. Warner was first elected to the Senate in 2008 after serving a term as Virginia governor.

NEWS RELEASE: Senator Mark Warner today formally filed his required ballot qualifying petitions with 33,275 signatures, more than triple the 10,000-signature requirement, in his re-election campaign for the U.S. Senate. He also announced that he will postpone his planned campaign announcement tour out of an abundance of caution for public health and will instead continue to focus on the country’s response to the coronavirus outbreak.

“In the face of the coronavirus outbreak, what we need is straight talk, less partisanship, more science, and a coordinated response,” said Warner. “So while I am proud to file for reelection today, my number one concern is the health and safety of my constituents. I have decided to postpone my announcement tour across the Commonwealth to be where Virginians need me most, serving them in my capacity as their United States Senator.”

A team of volunteers has collected signatures from every part of the Commonwealth. Virginia candidates for the United States Senate must submit 10,000 total signatures to the State Board of Elections by the end of March to qualify for the ballot, with at least 400 signatures collected from each congressional district.