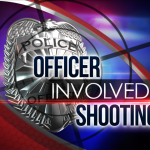 Police evacuated the surrounding apartments in the building.  Approximately 3:30 a.m., the suspect exited the apartment and was taken into custody without further incident. Damoan S. Townes, 31, of Roanoke, Va. was charged with two counts of 18.2-279 Discharging a firearm within a building with malicious intent.   There were no injuries in the exchange of gunfire. The City of Roanoke Police Department has placed the officers involved on administrative leave per their policy, until the investigation is completed. During the search of the apartment, the Virginia State Police recovered the firearm which is believed to have been used in the shooting.