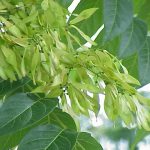 RAPHINE, Va. (AP) — The kudzu of the tree world could one day be controlled by a fungus.

Virginia Tech graduate student Rachel Brooks is testing how the fungus verticillium attacks tree of heaven, an invasive species for which Brooks used the kudzu reference. The hope: that the fungus will help kill the tree, which grows just about everywhere.

Tree of heaven is a plant from China that creates problems across Virginia and the country. The tree spreads and grows rapidly, growing as much as five to ten feet a year. It often chokes out native plants, blocks drivers’ views on roadways and grows in agricultural or urban areas. There is also some evidence that the tree is a preferred breeding spot for the invasive spotted lanternfly, which could wreak havoc on Virginia crops.

The plant is prevalent at the Shenandoah Valley Agricultural Research and Extension Center, where Brooks is studying it along with several other sites across the state.

She’s inoculated a few of the trees with verticillium fungus. In a little more than a year, the fungus has killed the trees that were exposed. It’s also spread the fungus through the interwoven tree of heaven root systems to kill off many of the trees in the area.

Brooks keeps coming back to measure the fungal effects.

“The end goal is a product that you can buy in the store,” Brooks said.

It will probably take two or more years of testing and navigating a series of regulations before that will happen, she said. A company would also have to find a way to commercialize the biocontrol.

Currently, if landowners or government agencies want to control the tree they use herbicides. That’s only a short term solution that often only kills one tree.

At a plot at the extension center here in Raphine, located in northern Rockbridge County, Brooks recently infected a few trees and the fungal infection spread to surrounding trees of heaven. A control stand of trees of heaven is unharmed less than a mile away.

Other vegetation didn’t appear to be affected, which backs up a study conducted by a team of Pennsylvania researchers, she said.

That makes sense. Verticillium fungus has been discovered around North America and has even naturally killed off trees of heaven in the New River Valley, Brooks said.

The fungus is not expected to eradicate the tree from the continent. But it will help landowners and other people keep the rapidly growing, invasive tree in check. That can pave the way for plants to grow a little more naturally, Brooks said.

“We want our native trees to have a place to grow,” she said.