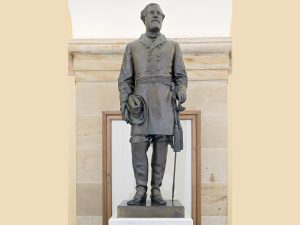 WASHINGTON (AP) — A state panel in Virginia will soon make a decision about the replacement for Virginia’s Robert E. Lee statue at the U.S. Capitol.

The Richmond Times-Dispatch reports that the Commission For Historical Statues In The United States Capitol is expected to make its recommendation on Dec. 16.

The recommendation will be made to Virginia’s General Assembly.

Like every other state, Virginia has two representatives in the Statuary Hall Collection at the U.S. Capitol in Washington. The state’s other statue is of George Washington.

Virginia picked Lee, the Confederate general, for one of its statues in 1909. The eight-member commission voted earlier this year to take down the Lee statute.

The Virginia Department of Historic Resources has been researching potential replacements while receiving suggestions from the public. The department is helping develop a list of five finalists for the panel’s consideration.

Names have been mentioned most often include former Secretary of State and Secretary of Defense George C. Marshall. Another is civil rights attorney Oliver W. Hill Sr.