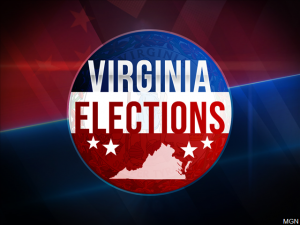 RICHMOND, Va. (AP) — Virginia officials certified the results of the Nov. 2 election on Monday, giving Republicans a two-seat majority in the House of Delegates. But two races where Republicans are leading by razor-thin margins are eligible for recounts, leaving open a remote possibility of a 50-50 split in the chamber.

The certified results show Republicans with a 52-48 majority over Democrats.

The Associated Press hasn’t called the two races that are within the margins for recounts: District 91, where Republican A.C. Cordoza leads Democratic Del. Martha Mugler by 94 votes out of 27,388 votes counted; and District 85, where Republican Karen Greenhalgh leads Democratic Del. Alex Askew by 127 votes out of 28,413 votes counted. The margin in both races is under 0.5%, which allows losing candidates to request state-funded recounts.

Mugler and Askew have not said yet whether they intend to seek recounts. Spokespersons for the candidates did not immediately respond to text and voicemail messages left by The Associated Press on Monday.

Under state law, once the state certifies the results, the losing candidates have 10 days to file petitions in court seeking recounts. Because the courts will be closed for Thanksgiving on Nov. 25 and Nov. 26, the deadline is Nov. 29. Kate Sarna, a spokesperson for the House Democratic Caucus, declined to comment.

Department of Elections Commissioner Chris Piper told a Richmond civic group last week that recounts are unlikely to change the outcomes of the races because of the size of the margins.

“We conducted a safe, secure and incredibly smooth election,” Piper told the Board of Elections just before it voted 5-0 to certify the election results.

If Republicans hold onto districts 85 and 91, they will control the House, 52-48, and complete an elections sweep in which they also reclaimed the offices of governor, lieutenant governor and attorney general. The state Senate has a slim 21-19 Democratic majority, with elections scheduled for 2023.

Democrats conceded control of the House to Republicans several days after the election, but tempered that concession after it became clear that the 85th and 91st districts appeared headed for recounts.

Republicans have repeatedly said they are confident the recount will not change the results of either race and that they will control the House when the General Assembly reconvenes in January.

Recounts in Virginia are not automatic. Under state law, a candidate cannot request a recount until the results are officially certified by the State Board of Elections.

If Mugler and Askew file petitions, a “recount court” of three judges would oversee the recounts. It is unclear how long the process would take, but in 2017, when partisan control of the House came down to a pivotal Hampton Roads seat, the recount was not held until late December.

The Republican victories are seen in part as a backlash against a series of progressive reforms that the former Democratic majority pushed through over the past two years, making Virginia an outlier in the South. Those included repealing the death penalty, loosening abortion restrictions and legalizing marijuana.

Democrats held a 55-45 majority in the House heading into the election.