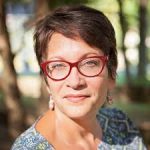 Assuming you can pry them away from their phones, tablets or TV’s, an award winning author some have called “the Judy Blume for a new generation” has suggestions for summer reading your kids may enjoy. She spoke with WFIR’s Gene Marrano:

A Big Mooncake for Little Star by Grace Lin

Papi Has a Motorcycle by Isabel Quintero

Under My Hijab by Hena Khan and illustrated by Aaliya Jaleel

A Boy Called Bat by Elana Arnold (others in series:  Bat and the Waiting Game and Bat and the End of Everything)

Dory Fantasmagory by Abby Hanlon (Four books in series; next installment this fall.)

The Last-Last Day of Summer by Lamar Giles

The Fresh New Face of Griselda by Jennifer Torres

The Parker Inheritance by Varian Johnson

The True History of Lyndie B. Hawkins by Gail Shepherd

The Jumbies series by Tracy Baptiste

A Maze Me:  Poems for Girls by Naomi Shibab Nye

Emma in the Key of Code by Aimee Lucido

With the Fire on High by Elizabeth Acevedo

Far From the Tree, new in paperback this summer, by Robin Benway

York, The Clockwork Ghost by Laura Ruby (Book 1 was The Shadow Cipher)

More Happy Than Not by Adam Silvera