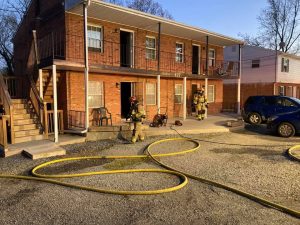 NEWS RELEASE: (Roanoke County, VA—March 3, 2021) Roanoke County Fire and Rescue responded at about 6p.m., on Wednesday, March 3, 2021 to the 400block of Vale Avenue, which is located in the Town of Vinton, for the report of a commercial structure fire at an apartment building. First arriving crews from Vinton found smoke coming from a first-floor apartment. The fire was brought under control in about fifteen minutes. There were no injuries. The apartment affected was occupied by a single adult female who was able to escape. The American Red Cross will be assisting the displaced resident. Residents of other apartments will not be displaced. The Roanoke County Fire Marshal’s Office has investigated and determined the fire to be accidental with damages estimated at $5000