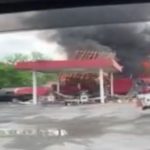 State Police news release: The Virginia State Police Bureau of Criminal Investigation has been notified by the Office of the Medical Examiner that identification of the victims of the South River Market Explosion and Fire in Rockbridge County has been completed. The cause of the explosion is still under investigation.

The three remaining victims have been identified by the Medical Examiner’s Office as:

[Police had previously identified one of the victims as 69-year-old Roger Roberts of Buena Vista, and families had previously indicated the three named above were also victims.]

The Virginia State Police continues to investigate the source of the explosion.

MAY 13: Two families have identified those who were also killed in the blast at the South River Market in Buena Vista last week. Authorities say besides 69-year-old Roger Roberts the owner, his son Kevin Roberts, and his granddaughter Samantha Lewis were also killed in the blast. Paul Ruley a regular customer also died as a result of the explosion.

PREVIOUS: MONDAY PM UPDATE FROM STATE POLICE: Roger Lee Roberts, 69, of Buena Vista, Va. was one of the four that were injured; Mr. Roberts succumbed to his injuries Saturday morning (May 11) at the VCU Medical Center.  The remains of the three unidentified bodies have all been transported to the Officer of the Medical Examiner in Roanoke, Virginia for examination, autopsy and positive identification to be made. Confirming the individuals’ identities could take several days.

SATURDAY PM UPDATE FROM STATE POLICE: The Virginia State Police Bureau of Criminal Investigation can confirm that three set of remains have been recovered from the site of yesterdays explosion and fire, at the South River Market in Rockbridge County. Those remains have been transported to the Medical Examiner’s for identification, which may take several days.

The Virginia State Police, Bureau of Criminal Investigation is treating the fire as a criminal investigation due to the fact that the cause of the fire is unknown. Until criminal activity is ruled out, this will be treated as a criminal matter as is standard procedures under such circumstances.

EARLIER SATURDAY: Two people are confirmed dead, and with others still unaccounted for at last report, investigators will continue a methodical search Saturday through what is left of  Buena Vista gas station and market. As of  8:30 am Saturday, police had not yet released the name of the two known victims. Four others were taken for hospital treatment.

Investigators are also working to determine what cause the fatal blast.

PREVIOUS: State Police are investigating the cause of an explosion and fire today at a gas station outside Buena Vista in Rockbridge County. Witnesses say they heard a large boom at the South River Market, and moments later, the gas station was ablaze. Four people were transported for hospital treatment. The Red Cross says it is sending multiple disaster responders to help those impacted by this morning’s fire and explosion.

From Virginia State Police: At approximately 9:50 a.m. this morning, Rockbridge County Sheriff’s Office and Rockbridge County Fire and Rescue was called to the scene of an explosion. The incident occurred at the South River Market on Old Buena Vista Road at its intersection with South River Road in Rockbridge County. At the request of the Rockbridge County Sheriff’s Office, the Virginia State police Bureau of Criminal Investigation, Salem, is conducting an investigation into the cause of the explosion, and at this time it does not appear suspicious in nature. At this stage police and fire crews are working to account for all the individuals that may have been located in the building at the time of the explosion. Four adults have been transported to Carilion Stonewall Jackson Hospital and are being treated for injuries. More information will follow as it is obtained.