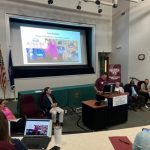 The USA Cycling Amateur Road National Championships are descending upon Roanoke City and Botetourt County on June 29 through July 2. The races include time trials, long distance team races similar to the Tour de France, and street races called Criterium that can be compared to Formula One racing on bikes. There will be over 700 male and female cyclists between the ages of 11 and 22 from over 40 different states competing– some of which are even hoping to qualify for the 2024 Olympics. USA Cycling Director of National Events Tara McCarthy on the longest course: