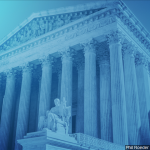 UPDATE:Virginia’s upcoming state elections that could determine the control of the General Assembly will be held under a redrawn election map following a decision by the US Supreme Court. WFIR’s Clark Palmer has more.

Previous: The U.S. Supreme Court has just upheld a lower court decision that House Republicans in Virginia’s General Assembly “lack the standing” in their appeal of a case regarding a District Court’s remedial redistricting of 11 eastern districts that were ruled unconstitutional for being racially gerrymandered. It means the lines drawn by the District Court will stand and be in place for the November General Assembly elections. House Democratic Leader Eileen Filler-Corn and Caucus Chair Charniele Herring called it “a major win for voting rights and civil rights in our Commonwealth.” The Republican party of Virginia tweeted: “Today’s ruling from SCOTUS will make victory in November even sweeter. We are confident Virginians will choose the common sense leadership of House Republicans over the radical agenda of [House Democrats].