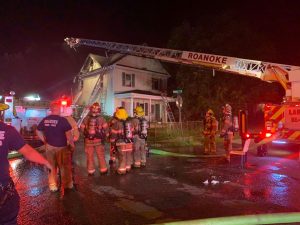 Roanoke Police have joined fire investigators seeking the cause of an overnight house fire that displaced four residents. Police involvement usually means the possibility of arson is being looked into. Crews were called out just before midnight to Dale Avenue and 7th Street Southeast and arrived to find smoke showing. Officials say one person was treated on scene for minor injuries.

UPDATED NEWS RELEASE: The cause of the fire is still under investigation. Roanoke Fire-EMS and Roanoke Police Department are asking anyone with information about this incident to call either the City of Roanoke’s Fire Marshal’s Office at (540) 853-2795 or the Roanoke Police Department at (540)344-8500 and share what you know. You can also text RPD at 274637; please begin the text with “RoanokePD” to ensure it’s properly sent. Both calls and texts can remain anonymous.

PREVIOUS: Thursday, June 11th, at 11:59pm, Roanoke Fire-EMS was dispatched to cross street of Dale Ave and 7th St SE for a fire. Units arrived to find a residential structure with smoke showing. One patient was treated on scene with minor injuries. ‪One dog was rescued from the fire and treated with oxygen. Four residents were displaced and are being assisted by the American Red Cross. The cause of the fire is under investigation.