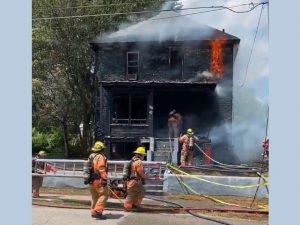 UPDATE FROM ROANOKE FIRE/EMS: Throughout the process of the investigation crews found the remains of a family pet, two additional animals remain unaccounted for. The home next door also sustained damage from the fire, displacing one adult and a number of pets. The City of Roanoke Fire Marshal’s Office continues to thoroughly investigate the cause of the fire, the damage is estimated at $125,000.  The Medical Examiner will make positive identification.

The second fire that broke out on Wise Ave (dispatched at 2:16pm) is not believed to be related.

PREVIOUS: At 1:50pm, Monday July 20th, Roanoke Fire-EMS was dispatched to the 1600 block of Stewart Ave SE for a fire. Units arrived to find flames coming from a residential structure. Firefighters were told on scene that one person escaped from the home by jumping from the 2nd story window and three other residents were trapped inside the structure. After further investigation it has been determined that there were only two residents in the home at the time of the fire. One resident is confirmed deceased, the medical examiner will confirm identification. The resident who jumped from the window was transported to RMH with injuries. One firefighter was also taken to the hospital for heat exposure. The fire is under investigation