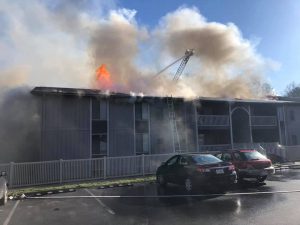 UPDATED NEWS RELEASE: The Roanoke County Fire Marshal’s Office has concluded that the fire yesterday on Circle Brook Drive in Pebble Creek Apartments originated on a balcony on the second floor of the structure and was accidental in nature. The cause of the fire was discarded smoking materials and damage estimates are $1,250,000.00. There were working smoke alarms in the apartments however due to the fire spreading from the balcony on the exterior into the attic space the alarms did not sound immediately.  Roanoke County Fire & Rescue would like to remind everyone to not discard cigarettes in vegetation such as mulch, potted plants or other things that could ignite easily. And, before you throw away butts and ashes, make sure they are out, dousing in water or sand is the best way to do that.

PREVIOUS: Roanoke County, VA—April 2, 2021) Roanoke County Fire and Rescue responded at about 5:10p.m., on Friday, April 2, 2021 to the 3300 block of Circle BrookDrive, in the Cave Spring area, for the report of a commercial structure fire at Pebble Creek Apartments. First arriving crews from Station 3 (Cave Spring) found heavy fire and smoke showing from the second and third stories and headed to the roof of a three-story apartment building. All occupants were able to evacuate safely and there were no injuries. Two cats that had been reported as still in the building, were able to be rescued. The building contained 24 apartments and 12 of those will be displaced.The American Red Cross will be assisting those affected by the fire. The fire was marked under control in about one hour. We appreciate the help of RoanokeFire and EMS on this call. The Roanoke County Fire Marshal’s Office is investigatingand will provide a damage estimate. ###