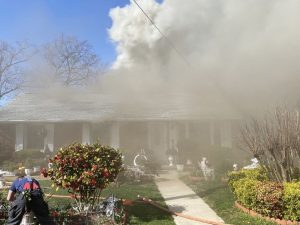 NEWS RELEASE: The Salem Fire & EMS Department responded to a structure fire at 1701 Victoria Street [Friday] afternoon at approximately 4:19 p.m. Two residents were at home at the time of the fire and while both were able to escape, one person suffered a non-life-threatening injury and was treated on the scene. The first units arrived within five minutes of receiving the call and found heavy smoke coming from the structure. Initial crews found heavy fire located in the basement that had extended into the first floor. The fire was brought under control within 35 minutes, but the building did sustain heavy fire and smoke damage throughout. Approximately 30 personnel from the Salem Fire & EMS Department (Truck 1, Engine 2, Engine 3, Medic 801, Medic 802, Medic 803, Battalion 1 & Fire Medic 1) and the Roanoke Fire & EMS Department (Engine 4, Engine 13, Ladder 5 & Battalion 1) responded to the call. The Salem Fire Marshal’s Office is currently investigating the fire and there is no damage estimate at this time.