Roanoke Police hope surveillance photos will help them find the two men who robbed a drug store of prescription medications. It happened shortly before 6:00 this morning at the CVS near Towers Shopping Center. Police say one of the suspects was armed with a baseball bat.

(Continue reading for the surveillance photos and the full Roanoke Police news release.) 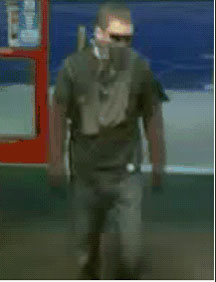 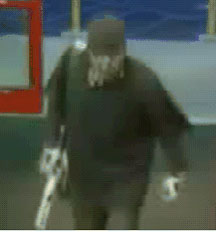 Roanoke, VA- The Roanoke Police Department is seeking suspects in a commercial robbery that occurred on May 24, 2013.  Officers responded at 5:49 a.m. to the CVS Pharmacy located in the 2000 block of Colonial Avenue. Upon arrival they located store employees who stated that two suspects entered the business, then entered the pharmacy area and demanded prescription medications.  The suspects obtained prescription medications and fled.  No one was hurt and no arrests have been made.  The suspects are described as two white males.  One of the suspects was carrying a white
baseball bat and a dark colored bag with ADIDAS written on it.  He is described being approximately five feet 11 inches in height weighing approximately 180 pounds.  He was wearing a short sleeve black t-shirt over a long sleeve black shirt, dark jeans, black and white gloves, a black knit cap, sunglasses, and a black bandana with a white design covering his face. The second suspect is described as being approximately six feet one inch in height, weighing between 180 and 185 pounds, with light brown hair.  He was wearing a short sleeve black t-shirt over a long sleeve maroon shirt, dark
jeans, gloves, and sunglasses.  His face was covered with a dark cloth. Anyone with information regarding this or other crimes should call the Roanoke Police Department at (540) 853-5959 or Crime Line at (540) 344-8500.  Crime Line may offer a monetary reward for any information leading to an arrest in a crime.