UPDATE: Two killed in I-81 accident 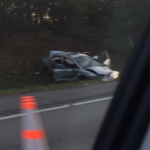 The Civic was driven by Mary Neff Elliott, 80, of Strasburg, Va.  Ms. Elliott was wearing her seatbelt and was flown by helicopter to Roanoke Memorial Hospital for injuries received in the crash.

There were four passengers in the Civic.  Donald Lee Neff, 70 and a 13-year-old, male juvenile, were both wearing their seatbelts and were transported to Roanoke Memorial for non-life threatening injuries.  Juanita Ann Neff, 65, and Charlene Dawn Hodson, 46, also of Strasburg, Va. were not wearing their seatbelts and were ejected from the vehicle; both died at the scene.

From State Police 11/16/18: The crash occurred at 1:02 p.m. at the 164.7 mile marker. This was a single vehicle crash with 5 people in the vehicle, two were ejected. The driver was flown from the scene, two others were transported to the hospital by ground. There are two confirmed fatalities. Traffic southbound is open and the left lane is open northbound while the reconstruction team conducts their investigation. More information will follow.