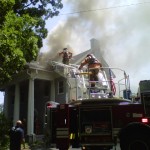 Roanoke firefighters needed more than one hour to declare a fire at the former Villa Heights Recreation Center under control. They were sent out shortly after 1:30, and arriving units reported flames on the ground floor and heavy smoke.  A short time later, commanders ordered all firefighters out of the building.  The former center building has been vacant and unused for about four years.