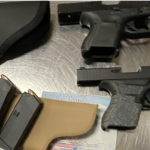 A man from Bedford County, Va., was cited by police after Transportation Security Administration (TSA) officers prevented him from carrying two loaded handguns onto his flight on Sunday, May 15, at Roanoke-Blacksburg Regional Airport. Both were semi-automatic handguns, one loaded with six bullets and the other with seven bullets.

A TSA officer who was staffing the checkpoint X-ray monitor spotted the weapons among the man’s carry-on items as they entered the checkpoint X-ray machine. TSA alerted the police who confiscated the handguns and issued the man a summons. The man told officials that he forgot that he was carrying his two guns. The Forest, Va., man also faces a stiff federal financial civil citation for bringing loaded guns to a security checkpoint.

“Passengers are permitted to travel with firearms only in checked baggage if they are unloaded and properly packaged and declared at their airline ticket counter. Guns on their person or accessible in their carry-on property are illegal and when detected at the screening checkpoint will result in a significant fine and potential criminal charges filed on the passenger. Security checkpoints and weapons don’t mix.” said Robin “Chuck” Burke, TSA’s Federal Security Director for the airport.