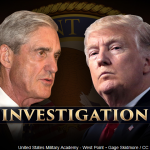 (from ABC News) President Trump said in a tweet Sunday that he is ordering the Department of Justice to “look into” whether his 2016 presidential campaign was improperly “infiltrated or surveilled” for political purposes. Trump added that he’d ask whether “any such demands or requests were made by people within the Obama Administration.” The Department of Justice currently did not have a comment on the tweet. The tweet is the latest escalation by the president in fueling an assertion that the Trump campaign may have been spied on by the  FBI or the DOJ. President Trump has sent out a series of tweets in recent days advancing the accusation first voiced by some conservative commentators that the FBI had a spy in the Trump campaign.

The Washington Post and New York Times have reported in recent days that the FBI sent an informant to talk to several Trump campaign aides during the 2016 election. The Times cited unnamed sources that these contacts were made only after the FBI had gathered information that the informant’s targets had made suspicious contacts with Russians during the campaign. The reports do not assert that there was an informant embedded inside the campaign or that the informant ever acted improperly.