UPDATE: Two dead, charges pending in crash that blocked I-81 for hours 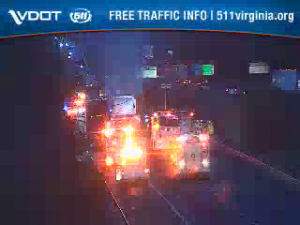 UPDATED January 27: State Police say  last week’s fiery and fatal crash on Interstate 81 started when a tractor-trailer rear-ended a car near the Dixie Caverns exit. Two trucks and two cars were involved, and both cars caught fire, killing both their drivers. Police identify them as 61-year-old Janet Ridenhour of Roanoke and 60-year-old Gary King of Christiansburg. Troopers say charges are pending.
NEWS RELEASE: Virginia State Police Trooper R. King is investigating a multi-vehicle crash that occurred at 5:23 p.m. Wednesday (Jan. 20) in Roanoke County.
A 2015 tractor-trailer traveling south on I-81 struck the rear of a 2005 Hyundai Sonata, which caused the Hyundai to spin out in the southbound lanes and overturn. Meanwhile the 2015 tractor-trailer struck a 2004 Chevrolet Impala. The impact of that crash pushed the Chevrolet into the rear of a 2017 tractor-trailer. The 2017 tractor-trailer pulled off onto the right shoulder as the 2015 tractor-trailer struck the Hyundai a second time. The Hyundai then collided with the 2017 tractor-trailer.  All of the vehicles were traveling in the southbound lanes of Interstate 81 when the crash occurred at the 132 mile marker. The impact of the crash caused the Chevrolet and Hyundai to catch fire.
The driver of the Chevrolet, Janet W. Ridenhour, 61, of Roanoke, Va., died at the scene.
The driver of the Hyundai, Gary L. King, 60, of Christiansburg, Va., died at the scene.
The driver of the 2015 tractor-trailer, Keith D. Williams, 42, of Winter Garden, Fla., was treated at the scene for minor injuries.
The driver of the 2017 tractor-trailer, Melvin D. McKee III, 53, of Chattanooga, Tenn., was not injured in the crash.
The Virginia State Police Salem Division Crash Reconstruction Team responded to the scene and is assisting with the ongoing crash investigation. Charges are pending. Alcohol was not a factor in the crash.

PREVIOUS: As of 11:00 pm, VDOT traffic cams show one lane moving very slowly past the scene. Emergency crews are still there, and one lane remains blocked.

PREVIOUS: A truck fire is creating major traffic troubles this evening on southbound Interstate 81 as you approach the Dixie Caverns exit. VDOT reports a truck fire has closed all southbound lanes near mile marker 133. VDOT traffic cams show the southbound side at a standstill for least four miles.