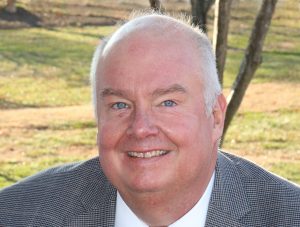 The new city manager in Salem is hardly new to the city. Jay Taliaferro was selected at a City Council meeting this morning. Taliaferro grew up in Salem, and he has worked for the city since 1991, more than 18 of those years as Assistant City Manager, and the past 11 months as Acting City Manager. He tells us he is already at work in efforts to make Salem City government more efficient:

He says helping current business there grow — and improving the Moyer Sports Complex — are two of his initial goals, as WFIR’s Evan Jones reports:

Taliaferro was selected from the 42 candidates who applied after a council majority asked for and received the resignation of former city manager Kevin Boggess last January.

NEWS RELEASE: This morning, Salem City Council members met in closed session and emerged from their discussions to announce that Jay Taliaferro has been chosen to lead the city on a full-time permanent basis. Taliaferro was selected over 42 other candidates who expressed interest in the job through a nationwide search that was conducted by the independent firm, GovHR USA, on behalf of Council. Taliaferro has served as Salem’s interim CityManager since January, when Council relieved Kevin Boggess of his duties after more than a decade of service.

“I am honored to have this unique opportunity to serve in my hometown,” says Taliaferro. “I have worked for Salem for 28 years and to now have the chance to work with City Council and be the City Manager for our citizens, as we move the city forward, is truly a privilege.”
Taliaferro served as a GIS Engineer for Salem from 1991-94. He was the city’s Assistant Engineer from 1994-1998 and City Engineer from 1998-2000. He made the move into administration in 2000 when he was named Salem’s Assistant City Manager.
Taliaferro is a Salem High School graduate, who has a Bachelor of Science degree from Clemson University in mechanical engineering and a master’s degree in public administration from Virginia Tech. His entire career he has been active on numerous regional boards and committees including the Western Virginia Regional Jail, Virginia’s Blue Ridge, Roanoke Regional Partnership and
the Roanoke Valley Workforce Development Board.
“The number of quality applicants we received for this position was impressive”, says Salem Mayor Randy Foley.  “We had a strong pool of candidates, but Mr. Taliaferro’s immense knowledge of the city and his willingness to move it forward made it clear that the best person for the job was already a city employee. He did everything Council asked of him during the difficult interim period, and we look forward to great things moving forward.”
Taliaferro and his wife, Elizabeth, have been married 26 years and they have two adult sons, Jimmy and Bobby. Jay’s father, Jim, was Salem’s Mayor from 1974-1996.