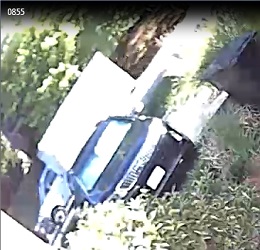 Police are investigating a string of burglaries in south Roanoke County. Officials say the burglaries occurred at about 10 residents since the beginning of August. They all happened while a majority of people are at work or school. Jewelry is the most commonly reported stolen item. A white Ford box van – similar to a refrigeration truck – with no writing or logos is a vehicle of interest in the case. Police ask that you report any suspicious vehicles or persons.

Continue reading for the press release from Roanoke County

From Roanoke County Police Department: Roanoke County police are investigating a string of residential burglaries that occurred in south County, between 8/01-16 – 9/28/16. The burglaries occurred between approximately 7:30 a.m. – 3:00 p.m. on Mondays, Wednesdays, Thursdays, and Sundays, but mostly on Wednesdays. The most commonly reported item of value stolen from within the residences is jewelry. Locations are as follows: 5400 block of Roselawn Rd., 4800 block of Topping Hill Dr., 4400 block of Buck Mountain Rd., 6000 block of Country Homes Rd., 3800 block of View Ave., 5500 block of Cynthia Dr., 3700 block of Buck Mountain Rd., 5100 block of Lakeland Dr., 4300 block of Faircrest Ln., and the 5100 block of Roselawn Rd. Addresses are listed in order from the first reported burglary to the most recent.

A possible vehicle of interest is a white Ford box van (similar to a refrigeration truck) with no writing or logos, and two heavy duty rear doors that swing to the side. This vehicle has been seen in more than one neighborhood where the burglaries have occurred, and was captured on home video surveillance at one residence.

Roanoke County police are seeking the public’s assistance by calling 911 or non-emergency dispatch at 562-3265 to report any suspicious vehicles or persons they may see within their neighborhoods. Anyone with information pertaining to these burgaries is also asked to call.