The Franklin County Sheriff’s Office is looking for the man who held up a Dollar General store at gunpoint last night just south of Rocky Mount. Officials say the suspect walked in, pointed a handgun at employees, then stole cash from the register and a large quantity of cigarettes. Anyone with information is asked to call the sheriff’s office. 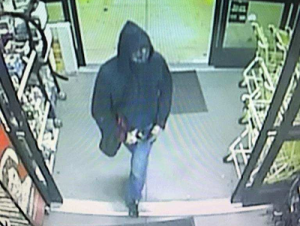 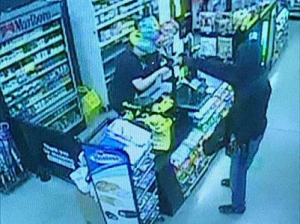 News release: The Franklin County Sheriff’s Office is currently investigating a robbery that occurred at the Dollar General Store on Virgil Goode Highway on 10/18/17 at approximately 9:44 PM. The Franklin County Sheriff’s Office 9-1-1 Communications Center received the initial call as a 9-1-1 call from a store employee reporting that the robbery had just occurred. When deputies arrived, the unknown suspect had already fled on foot headed south from the scene. The suspect was a male, approx. 5′ 8″ and 180 lbs. wearing; black zip-up hooded sweat shirt, blue jeans, burgundy t-shirt,  camouflage face mask and gloves. Employees advised that the suspect pointed a silver revolver at them and stole cash from the cash register and a large quantity of cigarettes. This is an ongoing investigation and additional information will be released as it becomes available. Anyone with information about the robbery is asked to call Investigations Sgt. Nolen at 540-483-6662.