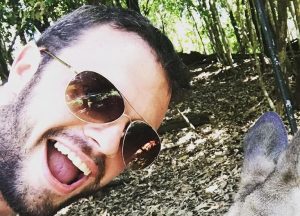 NEWS RELEASE: On April 6, 2020 John “J.C.” Wilson, 34 of Roanoke, was arrested in connection with the October 5, 2019 murder of Chad Erndt. Wilson is charged with First Degree Murder, Use of a Firearm in the commission of murder, and Possession of a firearm by a felon. Wilson turned himself in at the Roanoke Police Department.

PREVIOUS: The victim in this incident has been identified as Chad Erndt, 30 of Roanoke. No arrests have been made regarding this incident at this time.

PREVIOUS: On October 5, 2019 just before midnight, Roanoke Police responded to a report of shots fired in the 3800 block of Williamson Rd NW. Arriving officers located an adult male with gunshot wounds outside of a business in the immediate area. Roanoke Fire-EMS personnel pronounced the male deceased on scene. This is an ongoing investigation. Police do not believe there is any further danger to the community regarding this incident. No arrests have been made at this time.