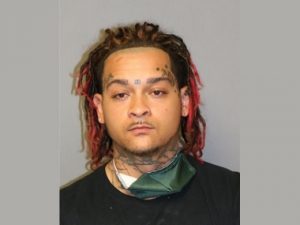 NEWS RELEASE: Justin Scott Murphy, 29 years old from Radford, was arrested without incident around 3:00a.m. this morning in the City of Radford by deputies from our office with the assistance of Radford Police Department. The arrest came after an intense investigation following yesterday’s breakin at TruHarvest Farm. Murphy has been charged with Breaking & Entering, three counts of Grand Larceny, and possession of a firearm by a felon. He is being held without bail in the Montgomery County Jail.

PREVIOUS: The Montgomery County Sheriff’s Office is currently attempting to locate the following individual in reference to the TruHarvest Breaking and Entering that occurred on February 24, 2021. Our office holds 5 felony warrant for the arrest of Justin Scott Murphy of Fairlawn, Virginia, in relation to the incident that occurred on this date. Justin Scott Murphy Fairlawn, Virginia 29 years of age Approximately 5’09’’ 230 pounds with black hair and brown eyes. Justin should be considered armed and dangerous.Anyone with information about the whereabouts of Justin Scott Murphy is asked to contact the Montgomery County Sheriff’s Office.

PREVIOUS: Shortly after 1:00 a.m. this morning deputies from our office responded to a burglar alarm at TruHarvest Farms in the Flanagan Drive area of Christiansburg Deputies arrived quickly enough to interrupt the burglary prior to anything being stolen. As more law enforcement arrived they began setting up a perimeter and in the process discovered a vehicle that is believed to belong to the offender. A short time later while searching the area, deputies noticed an individual fleeing in a side‐by‐side UTV. When the individual noticed law enforcement he abandoned the UTV and fled on foot. It was then discovered that the UTV was stolen.