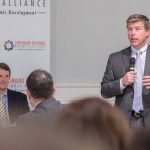 “From the first meeting of the newly formed Commission, it became abundantly clear that most of the Democratic citizen members, appointed by those in leadership who opposed the Redistricting Commission bill from the beginning, wanted this process to fail.

“I will never forget the Commission’s meeting on August 3rd. when some Democratic citizen members made it crystal clear to everyone that they didn’t care whether the process ended in new maps for the Commonwealth or not.  They were only interested in forcing their will onto the other members of the Commission. “Last month, it became obvious to me that Democratic citizen members just didn’t want this process to work. There was no way to overcome their intransigence.

“It was disingenuous to release a highly partisan plan for Senate districts – that had no connection to previous Commission or public input – during today’s Commission meeting and expecting that map be advanced.  Leaving the meeting to prevent its continuation only made matters worse.

“The Commission was able to create criteria that will help hold localities together, protecting communities of interest.  If the Democratic citizen members continue with their mission to derail the Commission’s work, I would hope the Supreme Court of Virginia would take the criteria that was agreed upon with a bipartisan consensus over the summer and use it as a solid foundation that will fulfill the intent of the original Constitutional Amendment, which was overwhelmingly approved by voters in Virginia last year.”