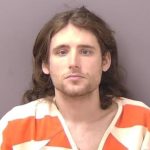 A suspect is facing capital murder charges after two Bridgewater College officers were shot dead during an on campus incident. WFIR’s Clark Palmer has details

The incident began at approximately 1:20 p.m. Tuesday when a Bridgewater College Police Officer and a Bridgewater College Campus Safety Officer responded to call for a suspicious adult male being located on the grounds of Memorial Hall. After a brief interaction with the man, the subject opened fire and shot both officers. The man then fled on foot.
Immediately following a 911 call, the Bridgewater College Police Department, Town of Bridgewater Police Department, Virginia State Police, Rockingham County Sheriff’s Office, City of Harrisonburg Police, Augusta County Sheriff’s Office, Town of Dayton Police Department and the Virginia Department of Wildlife Resources Conservation Police immediately responded to the scene. Search efforts were immediately underway across the campus.
A man fitting the shooter’s description was located on Riverside Drive in the town of Bridgewater. He then waded through the river and onto an island in the North River, which is located in the town of Bridgewater. Harrisonburg Police, Rockingham County Sheriff’s Deputies and Virginia State Police Special Agents took the individual into custody without further incident.
The man, identified as Alexander Wyatt Campbell, 27, was suffering from a non-life threatening gunshot wound. Campbell was transported to Rockingham Memorial Hospital, where he was treated and released. State police is still working to determine if he was shot by the Bridgewater College Police Officer or suffered a self-inflicted gunshot wound. Multiple firearms associated with Campbell have been recovered as evidence. Campbell’s last known address was Ashland, Va.
Virginia State Police charged Campbell with a total of four felonies: 2 counts of capital murder, 1 count of first degree murder, and 1 count of use of a firearm in the commission of a felony. Campbell is being held without bond at the Rockingham County Jail.  State police are requesting anyone with video/images or information related to this shooting, to please share with investigators at vsphtcs@vsp.virginia.gov.
The FBI and ATF are assisting with the ongoing criminal investigation. Despite the valiant efforts of responding officers and paramedics, the two officers succumbed to their injuries at the scene.