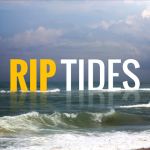 EMERALD ISLE, N.C. (AP) — A Halifax County, Virginia man has drowned amid dangerous surf conditions in North Carolina. 41-year-old Troy Strickland of Halifax was attempting to save a young girl from rip current tides at Emerald Isle. A video from a witness at a beach there shows people trying to rescue swimmers by linking arms to form a long chain. The Town of Emerald Isle tweeted the drowning happened Wednesday afternoon and that red flags indicating people should not swim were in place at beaches. Town manager Frank Rush says the person who drowned was a 41-year-old man visiting on vacation. The video Shane Gentry provided to news outlets shows beachgoers in Emerald Isle lined up arm-in-arm and attempting to pull people from the rough water. Gentry says “it was nuts. I’ve never seen anything like it.” Halifax County softball organization, Halifax Heat, mentioned that Strickland was a manager and engineer for one of the teams.