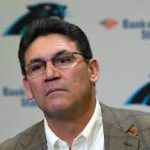 The Washington Redskins will hire two time NFL coach of the Year and former Carolina Panthers head coach Ron Rivera as their head coach. Reports are he may bring in Jack Del Rio as defensive coordinator. Rivera played on the Super Bowl-winning ’85 bears and brought his Panthers to the Super Bowl in 2016. The Redskins are heard here on WFIR. NFL network’s Kyle Brandt on the Rivera hire: