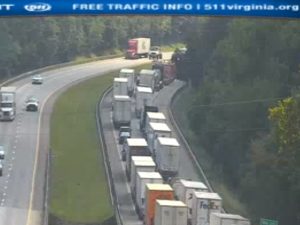 UPDATE: State Police say a driver who led them on a high-speed chase on Interstate 81 fatally shot himself inside his vehicle near Christiansburg. Troopers say the pursuit began as Botetourt County Sheriff’s deputies attempted to arrest a man wanted in Pennsylvania. It then went southbound on 81 until State Police were able to stop it, but officials say the driver then took his own life with a handgun. The man’s name was not immediately released.

PREVIOUS: State Police closed down a 14-mile stretch of southbound Interstate 81 for a while this afternoon after a driver being pursued crashed and died, apparently from a self-inflicted gunshot wound. State Police say the pursuit started in Botetourt County and ended near milemarker 119, about a mile before the Christiansburg exit. Southbound traffic around Salem is still slow in places, the leftover result of an earlier detour that had taken all vehicles off the Interstate at Dixie Caverns.

NEWS RELEASE: At approximately 1:22 p.m., the Virginia State Police began assisting the Botetourt County Sheriff’s Office with an ongoing pursuit of an individual wanted by Pennsylvania authorities.  The male individual was believed to be armed and dangerous.

The pursuit continued south on Interstate 81 through Roanoke County and into Montgomery County. Near the 119 mile marker, state police contained the vehicle and brought it to a stop. As the Troopers approached the vehicle, the male driver fired a revolver while seated inside the vehicle. Despite rescue efforts administered by the troopers, the male subject succumbed to the self-inflicted gunshot wound at the scene. His remains will be transferred to the Office of the Medical Examiner in Roanoke for autopsy, examination and positive identification.

No troopers discharged their weapons. No troopers were injured during the shooting. No other vehicles or individuals were involved in the pursuit or shooting.

PREVIOUS UPDATE: Interstate 81 is open to southbound traffic once again between Dixie Caverns and Christiansburg.

PREVIOUS: Southbound traffic on Interstate 81 is being detoured off the roadway between Dixie Caverns and Christiansburg for what VDOT describes as a “security or police activity.” Reports indicate a driver who led police on a high-speed chase took his own life after crashing near milemarker 119. As police investigate, expect major southbound delays now beginning near milemarker 138, about six miles before that detour begins, and continuing all the way up US 11/460 to Christiansburg.