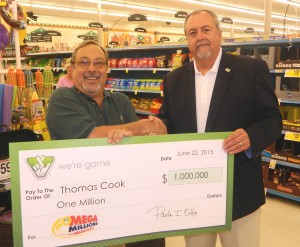 The Virginia Lottery says Tom Cook purchased his Mega Millions winning ticket at a Kroger in Salem. Cook returned to the store Monday to pick up his check. The store also received $10,000 from the lottery for selling the winning ticket. Lottery spokesman John Hagerty says after taxes, Cook’s award is about $710,000. On prizes more than $5,000, the Lottery withholds 25 percent for federal taxes and 4 percent for state taxes. Cook told Virginia Lottery that he doesn’t have any immediate plans for his winnings. Cook is the fourth person in Virginia to win at least $1 million in Mega Millions within the past two months.