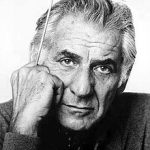 The final Roanoke Symphony Orchestra “Masterworks” concert of the season is this Saturday night at the Berglund Performing Arts Center. Its the Bernstein Centennial Celebration, honoring the late American classical composer and music director Leonard  Bernstein, who would have been 100 this year. RSO music director David Stewart Wiley worked with the man he knew as “Lenny” early in his career. He spoke to WFIR’s Gene Marrano about that and about this Saturday night’s concert – here is a “Longer Listen”: