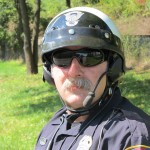 Roanoke Police have quadrupled the number of motorcycle traffic enforcement units this month — from one to four. In recent months, Officer Gayle Combs  had served in that role by himself, making more Roanoke city traffic stops this year than anyone else. WFIR’s Evan Jones hit the roadways with Officer Combs, who shared how he patrols and what he looks for. (Continue reading for a list of the locations he patrols most frequently.)

Officer Combs’ list of most frequently-patrols areas for speed enforcement:

Roanoke police also respond to citizen complaints of speeders on their neighborhood streets.