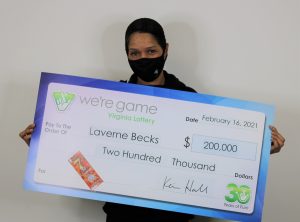 A Roanoke woman is a $200,000 Virginia Lottery winner. Laverne Becks scratched one of ten top tickets in the Jewel 7s game. Three more top prize tickets remain in the game statewide. Becks tells lottery officials she plans to use her winnings to purchase a new car.

NEWS RELEASE: Laverne Becks had just gotten home from work. The Roanoke woman decided to unwind by scratching the two Jewel 7s tickets she had bought and brought home with her. However, it turned out to be anything but a relaxing experience.

“I scratched the second ticket, and I fell on the floor!” she said.

That’s because the second ticket just happened to be a $200,000 winner.

She bought it at the Food Lion at 629 Peters Creek Road NW in Roanoke.

Her ticket is the seventh of ten top available top prize winners claimed in this game.

Ms. Becks said she hopes to use her winnings to buy a new car.