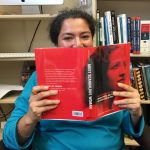 After about 20 years of research, Roanoke College History Professor Ivonne Wallace Fuentes published her book this week on the life of Magda Portal — a 20th Century political activist in Latin America. Portal – a poet and journalist – set out to live life on her own terms in the late 1920’s. She went on to help establish one of the most important political parties in South America, known as the American Popular Revolutionary Alliance (APRA). Wallace Fuentes spoke to WFIR’s Lillian Boyd in this “Longer Listen” on how Portal’s legacy is still applicable today.

From the Synopsis: “In 1926 a young Peruvian woman picked up a gun, wrested her infant daughter from her husband, and liberated herself from the constraints of a patriarchal society. Magda Portal, a poet and journalist, would become one of Latin America’s most successful and controversial politicians. In this richly nuanced portrayal of Portal, historian Myrna Ivonne Wallace Fuentes chronicles the dramatic rise and fall of this prominent twentieth-century revolutionary within the broader history of leftist movements, gender politics, and literary modernism in Latin America.”