From Roanoke City Police: On July 1, 2016 at 11:43 a.m. Roanoke Police responded to the 4800 block of Melrose Avenue NW, Roanoke Golf Cars, to investigate a report of two vehicles being stolen from the lot. The vehicles stolen were a pair of Bad Boy Recoil 4×4 off road vehicles. Both vehicles were camouflage in color with four person occupancy. A picture of what the stolen vehicles look like is below, as well as a still shot of the suspect vehicle taken from a nearby surveillance camera. Anyone with information can call the RPD tipline at 540-344-8500. Callers can choose to remain anonymous. Anonymous text messages can also be sent to the number 274637 [CRIMES]. Please start the text message with the keyword RoanokePD: to ensure that it’s properly sent. 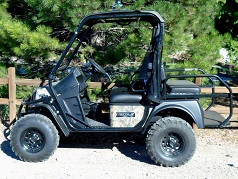 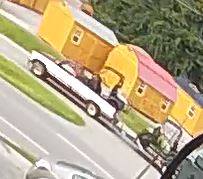