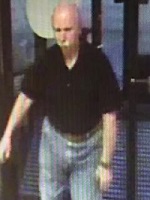 From Roanoke Police: Roanoke, Va.– Roanoke Police need your help identifying a man who touched two teenage girls in a non-sexual manner and began speaking with them on September 24, 2016 at Valley View Mall. The first incident was reported to police at 8:28 p.m. Officers collected video evidence of the suspect. Officers later learned of another incident that happened to a separate teenage girl a short time before officers were called to the mall. Officers spoke with the second girl who provided a similar account of what had occurred with her. She provided a description of the suspect. This incident also occurred at the mall. The suspect is described as a bald white male, large build, wearing a black polo shirt, blue jeans and white shoes. Officers have provided the attached photo to mall security and loss prevention personnel. Anyone who might recognize the suspect is encouraged to call the RPD tip line at 540-344-8500. Anonymous text messages can be sent to the number 274637 [Crimes]. Please start the text message with the keyword “RoanokePD:” to ensure that it’s properly sent.