FROM ROANOKE POLICE: On January 25, 2014 at 10:32 a.m. the Roanoke Police Department responded to the CVS in the 1900 block of Orange Avenue NW to investigate a robbery call.  The suspect is a black male wearing a black jacket with a hood, a white scarf over the bottom portion of the face, black rimmed glasses, black gloves, blue jeans, and brown Timberland style work boots.  The suspect demanded money from a store clerk.  After receiving an undisclosed amount of money, the suspect left on a bicycle headed east in a nearby alley way.  The suspect has some similar characteristics to the suspect who robbed Loan Max on January 22, 2014 in the 3200 block of Williamson Road. Anyone with information can call the Roanoke Valley Crime Line at 540-344-8500. 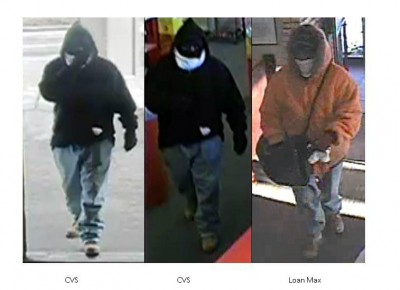