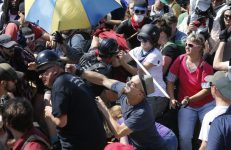 A woman who grew up in Roanoke was in Charlottesville last weekend during the deadly clash between a white nationalist rally and counter protesters. Taylor Zimmer says the violent rallies combined with the national media coverage makes it feel like we’re on the verge of a race war. More from WFIR’s Ian Price: