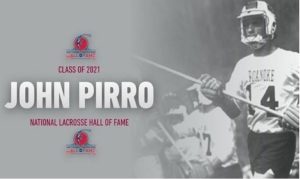 A Roanoke College sports legend will be posthumously inducted this weekend into the National Lacrosse Hall of Fame, nine years after his death from a debilitating disease. John Pirro helped lead the lacrosse program to prominence, winning the national title one year after he graduated in 1977. Pirro later returned to campus as lacrosse coach for five years. He died at age 57 from Huntington’s Disease, and his legacy at Roanoke goes far beyond the playing field, as WFIR’s Evan Jones reports: