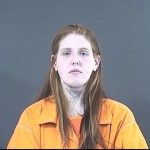 Roanoke County Police have arrested a suspect in a shooting incident that took place Monday on Skyview Road. The gunshot victim was treated and released. Roanoke County now says 27 year old Catlyn Stewart of Roanoke County was taken into custody on New Year’s Eve without incident. She’s been charged with abduction, malicious wounding and possession and use of a firearm by a convicted felon.