Roanoke County Fire & Rescue promotes from within for new chief 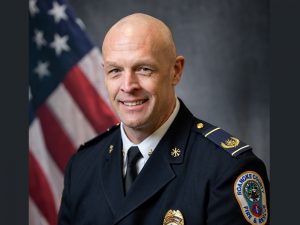 NEWS RELEASE: (Roanoke County, VA—March 4, 2021) Roanoke County Administrator Dan O’Donnell today announced the appointment of Travis Griffith as Fire & Rescue Chief. Griffith will assume his new position March 8.”We held a nationwide recruitment process and had many qualified applicants from several states,” said O’Donnell. “It reflects highly on the quality of our employees that the best choice was already here in our Fire & Rescue Department . We have an excellent department and Chief Griffith will be able to hit the ground running with his thorough knowledge of our people and operations.” Board of Supervisors Chairman Jason Peters added, “Travis is a dedicated servant to his profession and to the citizens of Roanoke County. I know he will step seamlessly into this role and provide the leadership and vision to prepare the department for future growth.”

Griffith currently serves as Deputy Chief of Operations for Roanoke County Fire & Rescue. “I am humbled to have been chosen to stand beside the women and men of this great department as their Fire Chief,” said Griffith. “I am thankful to have received this opportunity and everything we do will continue to be based around providing superior service to those in need.”
Griffith began his service with Roanoke County Fire & Rescue in 2002 as a Firefighter/Emergency Medical Technician for the department. He was promoted up through the ranks becoming a Lieutenant in 2005, Captain in 2008, Battalion Chief in 2012, and to his most recent position in 2015. During his tenure Griffith has coordinated and implemented over $4.9 million in federal funding for the department for equipment and staffing. Griffith collaborated with the County’s other public safety agencies to develop a leadership academy to provide valuable training and professional growth for personnel. He has also led the department’s COVID response to ensure the safety of personnel, as well as equip all County employees with supplies to ensure a safe workplace. –
Griffith holds a Bachelor of Arts Degree from the University of Virginia and is a graduate of the National Fire Academy’s prestigious Executive Fire Officer Program. Griffith resides in Roanoke County with his wife Ellen and daughters Carly and Claire. Griffith follows Fire & Rescue Chief Steve Simon who retired in February 2021 after serving 27 years with the department. The Roanoke County Fire & Rescue department is a combination system, utilizing career and volunteer personnel to provide fire and rescue services. The department responds from 13 stations, employs 200full-time career personnel, and has nearly 200 active volunteers.