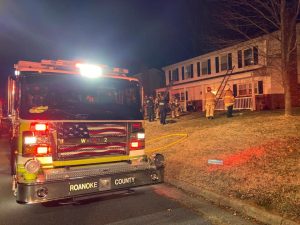 ( From Roanoke County Fire and Rescue)

From Roanoke County Fire and Rescue:  Roanoke County Fire and Rescue responded at approximately 5:30p.m. on Wednesday, December 15, 2021 to the 1100block of Pedigo Lane, in the Vinton area, for the report of a residential structure fire. First arriving crews from Roanoke County Station 2(Vinton)found light smoke showing from a two story, single family home and marked it a working fire. The fire was controlled in less than 15 minutes from the time of dispatch. The house was occupied by one adult and one teen at the time of the fire. They were alerted to the fire by the presence of working smoking alarms in the home and escaped unharmed. There were no other injuries. The displaced family of three will be staying with family. The Roanoke County Fire Marshal’s Office is on scene to investigate a cause and provide a damage estimate. We appreciate the assistance of Roanoke Fire and EMS on this call. This fire shows the importance of having working smoke alarms in your home.

The Roanoke County Fire Marshal’s Office has concluded that the cause of this fire was an unattended candle and damages are estimated at $35,000. We would like to remind everyone that December is the leading month of the year for candle related fires. Lit candles should never be left unattended. Also, for the second time in less than a week, working smoking alarms have notified occupants of a fire and allowed them to escape unharmed in Roanoke County.