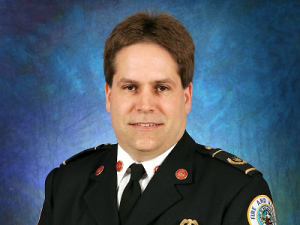 From Roanoke County Fire and Rescue Department: Roanoke County Fire & Rescue Chief Stephen G. Simon today announced he will be retiring, effective March 1, 2021. Simon notified County Administrator Daniel O’Donnell last week.“I have been blessed to serve the community as a member of the Roanoke County Fire & Rescue Department, and privileged to have had the opportunity to lead the organization,” said Simon. “I am grateful to the men and women of the Department who provide the exceptional service our citizens have come to expect.” “Steve has had a long and distinguished career in public service,” said O’Donnell. “He is to be commended for his dedication to the profession and to serving the citizens of Roanoke County. We will miss his leadership and guidance but wish him well in the next phase of life.”Simon has served as Roanoke County’s Fire & Rescue Chief since July 2015. He began his service with Roanoke County in 1994 as a Paramedic/Firefighter for the department. He was promoted up through the ranks from Fire Lieutenant, EMS Captain, Battalion Chief, and Deputy Chief.Prior to joining the County, Simon was employed by Roanoke City as a paramedic and began his career in Prince William County at the Dale City Volunteer Fire Department in 1986. Simon has served as adjunct faculty for Jefferson College of Health Sciences, Hampton University and Radford University. Simon has served on multiple regional, state and federal committees for the betterment of Fire-EMS services for Roanoke County. Simon also served on the board of the Western Virginia EMS Council for 17 years representing Roanoke County. An interim Chief will be named in the coming months.###